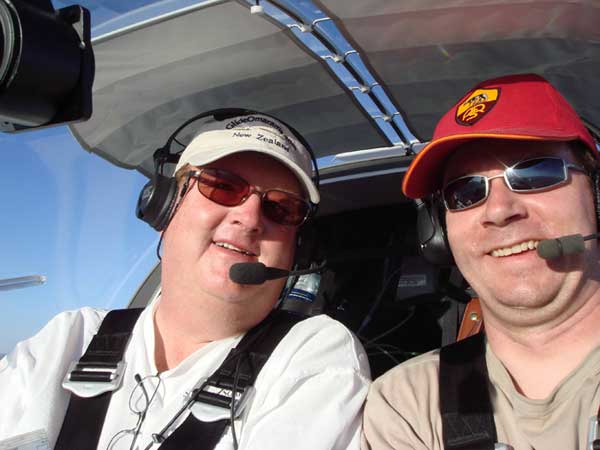 In May 2014 I spent 2 weeks with Sky King Soaring in Payson AZ. to obtain my FAA Commercial Glider Certificate.

Even though I had not flown in the United States for quite a while, Russ Hustead’s world-class expertise as a CFIG and patience got me current with FAA regulations again.

Beautiful country side, very good flying weather, Arizona hospitality and a great Flight Instructor made time fly until my practical test which I passed on the 17th of May.

I will be coming back!

I recently had the pleasure of flying with and meeting Russ Hustead, the owner and operator of Sky King Soaring in Payson, AZ. Payson is a nice town about 90 min outside of Phoenix, AZ. The airport and the town of Payson were friendly and very inviting.

The real story is the outstanding experience of making a new friend and flying with a great pilot while adding on a self-launch glider endorsement in the Diamond HK-36 motor glider. When you are flying with Russ the first thing that you are going to notice is that you are having fun (a lot of fun) as you accomplish your training. Russ is highly recommended and I can see why. He is a mentor first and foremost. His professional knowledge and capabilities are second to none and he is focused on ensuring that you are equipped to enjoy all of your soaring experiences during your training at Sky King and well beyond.

After 43 years of flying a variety of airplanes from light aircraft to supersonic jet fighters and airliners, it is always a privilege to fly with a professional aviator the caliber of Russ Hustead.

A letter from Terry Pearce from England

Just to say that at last I have a share of the little Grob 109B! I’m fully licenced and checked out! I actually did a little soaring today, not quite Arizona lift, but enough to have fun. As promised, I’ve included a photo, resplendent in my Sky King Soaring shirt!!

I trust that all is well with you, best regards, Terry.

To Whom It May Concern:

I have been aware of Russell Hustead and his Sky King Soaring operation since before the summer of 1990. I have known Russ since qualifying with him to fly self launched gliders in March, 2001. I have examined students he has trained for initial glider ratings and for additional aircraft ratings in gliders.

He has a national and international reputation drawing students and others interested in gliders and Arizona from other countries and throughout the United States.

His training standards and demeanor are worthy of emulation. His base of operations in Payson is an additional factor in many peoples choice to train or fly with him.

He is known for his emphasis on safety, knowledge of Arizona and the Payson region. His students are completely prepared for solo flights and for practical tests for glider ratings.

Russ and Sky King Soaring are assets that any community and airport would want to have represent them.

A letter from James in California

To Whom It May Concern:

I am a certificated airplane pilot, visiting Payson, Arizona for the specific purpose of taking motorglider flight instruction from Russ Hustead, owner of Sky King Soaring, L.L.C. My wife and I drove to Payson from our home near San Francisco, California to enjoy the beautiful surroundings and so that I could benefit by improving my flying skills by working with Russ, a highly regarded Certified Glider Flight Instructor, whose reputation reaches far beyond Payson.

My wife and I have very much enjoyed the hospitality we’ve encountered in Payson. We are staying at a local motel, have eaten in local restaurants, shopped in Payson grocery stores and have even had our car tire repaired at a local tire shop after a nail puncture.

I am particularly happy with the flight instruction I am receiving from Russ Hustead. I was perfectly willing for Russ to take my wife, a non-pilot, on an introductory flight, too, which she enjoyed immensely. I am well qualified to judge flight instructors and flying businesses, having been a long time FAA Certified Flight Instructor as well as an Airline Transport rated pilot. It has struck me that Sky King Soaring is a valuable asset to the Payson community, as it draws visitors from many areas, who undoubtedly contribute to Payson’s economy in their own ways.

Today I witnessed an event which could have negatively affected Payson’s economy, were it not for Russ Hustead’s timely intervention. While Russ and I were waiting to take off from the Payson Airport in his motorglider another airplane was on final approach to the runway. As the airplane neared we both noticed that its landing gear was not extended. As it became clear that the airplane’s pilot was about to land gear-up (it was very close to the ground by this time), Russ immediately transmitted a warning to the other pilot on the airport radio frequency. The airplane pilot added power and flew another landing pattern, meanwhile thanking Russ for the “gear save”. Had the airplane landed gear-up, it would have resulted in an expensive accident and an airport closure by the FAA for at least several hours. This would have had a negative economic impact on the Payson Airport, as no other aircraft could have landed or taken off for several hours. Not only that, I would have had to cancel my motorglider flight lesson. Thank you, Russ!

My wife and I intend to return to Payson. We hope that we’ll be able to enjoy Sky King Soaring’s and Russ Hustead’s services again.

The following are excerpts from Kyle and Maryanne’s post on their flight from the Phoenix, AZ area to the Grand Canyon. Russ flew the motorglider down from his home base in Payson so that they could have a full day of flying rather than driving.

Kyle turned 40 in December of 2007. We spent some time to choose what to do to make this milestone memorable. Kyle had been keen to take Maryanne on a soaring flight – he had learned and spent a lot of time soaring in his younger years; this is what he really wanted to do to celebrate this milestone age!

Kyle received a surprise gift from his Mom (Carla); she had bought him a day trip in a motor glider in Arizona. That would enable him to fly to the Grand Canyon, which neither of us had seen but was on both our lists! After some negotiation, Kyle confirmed he would be able to take Maryanne with him after a short check out flight in the Diamond Xtreme Motorglider and certification/approval for self launch by the owner, Russell Hustead of Sky King Soaring.

Kyle took the check out flight on Wednesday 16th January – this involved a few take offs and landings at Glendale airport in Phoenix. After looking at weather, and matching our own schedule we took off for our day of flying from Payson airport on Friday 18th January. Russ had done a wonderful job of directing us to a great route! We started off leaving Payson for Sedona – a beautiful town famous for its distinctive rock formations.

From there we flew to the Grand Canyon airport (rest stop!) and then through the area known as the Zuni Corridor (air traffic corridor) of the Grand Canyon. This follows the path of the Colorado River, and also parts of the Little Colorado River. The scenery was absolutely amazing! The bubble canopy of the plane, gave the sensation of sitting on top of the motorglider and with and the slightly nose down position gave an unhindered view of the surroundings. With the great views and the freedom to alter our flight path to look at things that interest us (as often as we wanted) – we can’t imagine a better way to see this area – it was wonderful.

Since our return route was over very remote terrain without the altitude restrictions of the parks, we were able to fly much lower and really get into the terrain and enjoyed sights such as the painted desert, Meteor Crater (around 4000 feet diameter, formed when a meteor of around 50m hit the earth about 50,000 years ago!), wide open expanses, sand dunes, cliffs, drop offs, and more mini-canyons – WOW! 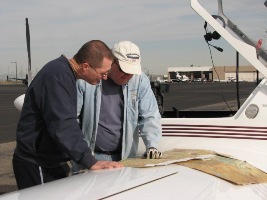 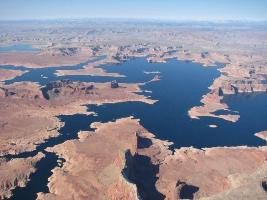 IMG 0366A view of Lake Powell near the Grand Canyon.
+ 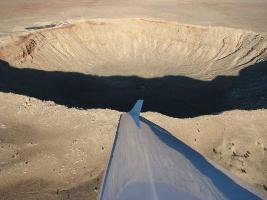 We eventually arrived back at Payson (again with the engine off after some soaring) and returned the plane to Russ with many thanks.

A letter from Jens, a student from Germany

Thank you very much for your warm welcome. I felt very comfortable staying with you and enjoyed flying and gliding every day in beautiful Payson, Arizona and California.

Thanks to you Russ, my dream of flying came true last year. This year I could enjoy a very pleasant trip from Payson to Los Angeles in your motorglider with you. It was quite thrilling flying over the desert for a few hours and being side to side with F-16 fighters who were making their exercises. When flying over Los Angels it gave me an impression how big this city is. For me as a German it was an extraordinary experience to see all the wide of this country – the best way to see this is 10.000 feet high in the air in a silent glider.

After I have told my wife about flying with you she can’t wait to do some soaring and flight training in your motorglider with you. We are already planning to come back next year!

Hope to be soon in Payson again!

From: Lora Korman
Sent: Thursday, March 29, 2007
To: Russell Hustead
Subject: Thank you so much!

I wanted to write and thank you from the bottom of my heart for giving Will the experience of a lifetime this past Sunday. I knew that he would have a wonderful time soaring with you, Russ, and just as I had suspected, it was the highlight of the trip for him. He hasn’t stopped talking about it!!!

You are both such wonderful people and I thoroughly enjoyed meeting you both. I hope that the next time we see you, you’ll allow us to take you to lunch or dinner.

Please let us know if there is anything that we can do to help market your business. We are telling everyone we know about SkyKing and I will be writing a review on the TripAdvisor site (unless you prefer that I not do so.) I’m sure that Will told you, but feel free to add us to your list of references should potential clients request one.

Have a wonderful day.
Lora

Bradley lands with a fabulous smile after his first soaring flight